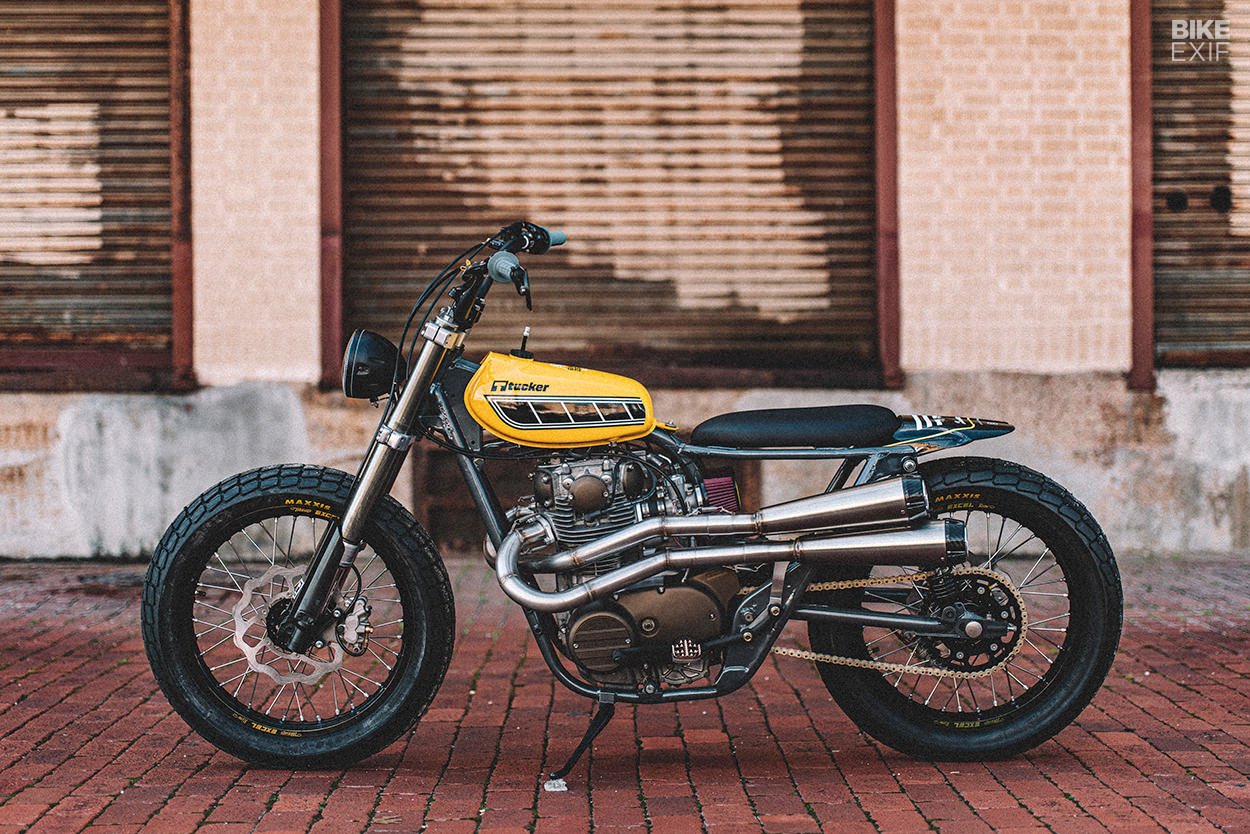 Did you know that the evergreen Yamaha XS650 was launched over half a century ago? Although the production line closed down in 1985, the air-cooled parallel twin is still a top choice for many custom builders, including Minnesota-based Dan Riley.

Operating as Gunn Design, Dan is a gifted freelance designer with good business smarts, too. A few months ago, he contacted Tucker Powersports and suggested a custom bike collaboration—which makes sense, because Tucker distributes custom-oriented brands that regularly appear on these pages, such as Vance & Hines, ProTaper and Renthal. 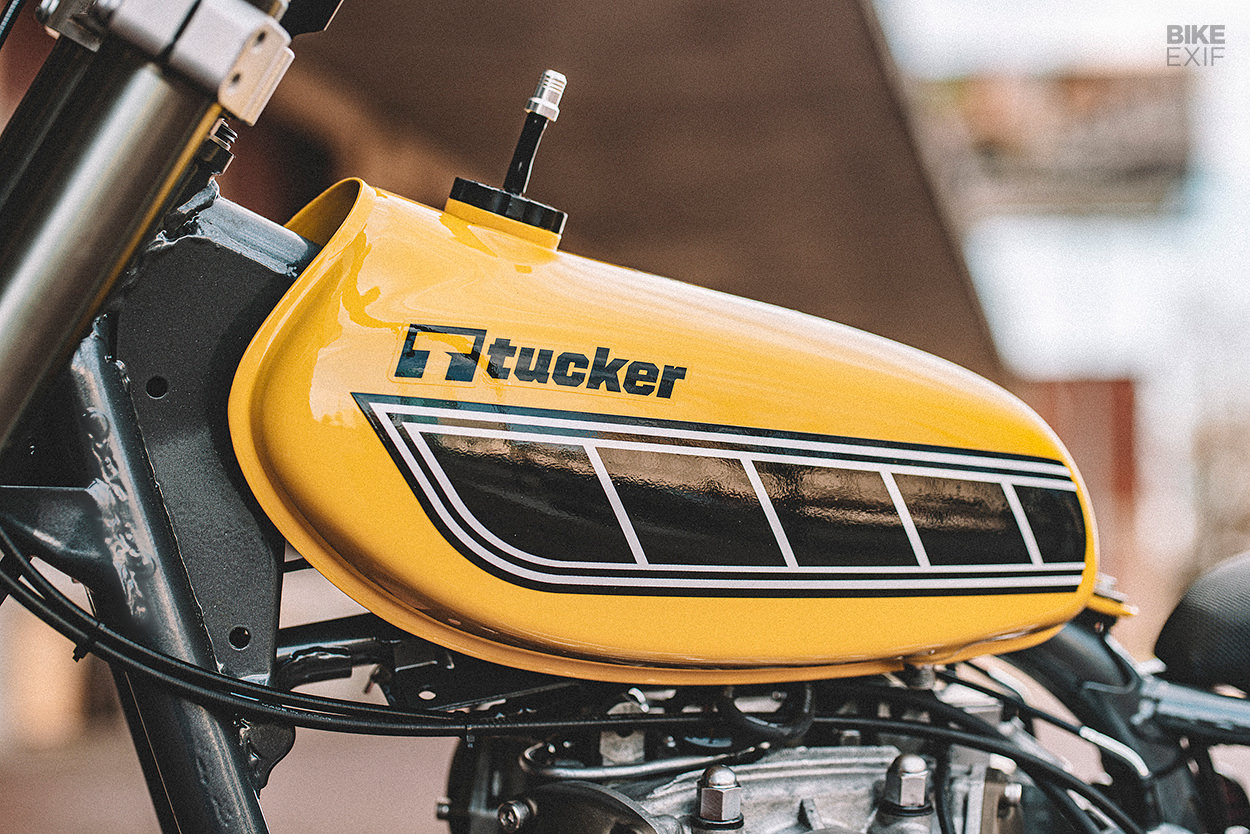 Dan pitched the idea of a build using parts sourced from Tucker brands, and suggested a platform he has worked with on several occasions—the XS650. The Tucker folks agreed, and a 1975 XS650 was bought off Craigslist for a mere $650.

Now called the ‘Techno Tracker,’ the Yamaha had to be finished in time for the annual Tucker dealer show held every January. 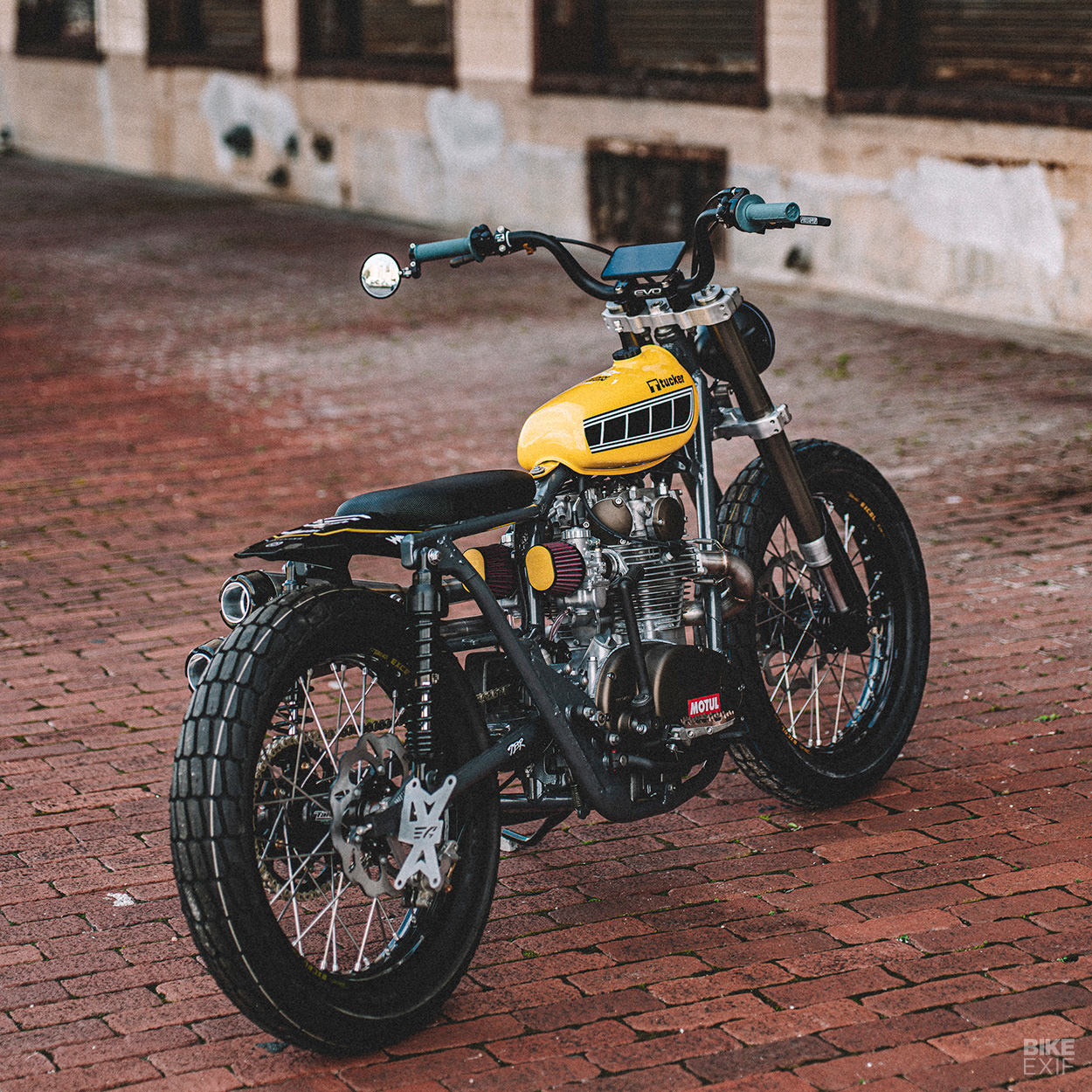 Dan set to work on turning his concept into reality. “It serves as an example of what can be done primarily with bolt-on parts,” Dan says, “and on a budget less than the cost of a new motorcycle.”

A few key parts are not from the Tucker catalogs, but they’re still mostly bolt-on and affordable. Dan’s used the forks from a YZ250, and has grafted on the front calipers from a bigger YZ450—using them at both ends of the XS650. 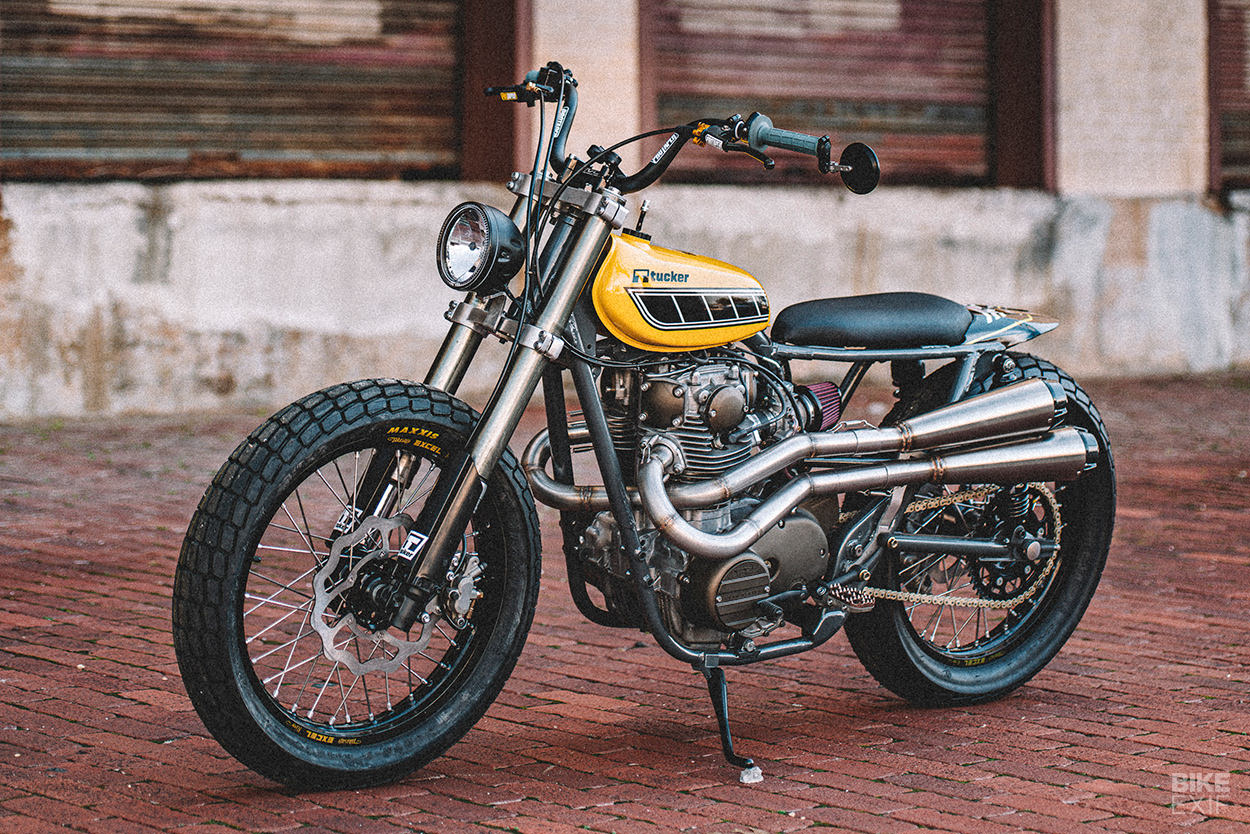 “I mounted the YZ forks using the stock triple clamps,” he explains, “milled down and with the casting marks shaved off. There’s a custom set of tapered roller cone bearings to mate them to the XS frame.”

The forks have been lowered from the stock YZ height, going down from a lofty 11 inches of travel to a more road-friendly four inches. The brake rotors and lines are from Galfer, and power hits the back wheel via a ProTaper YZ450 sprocket. 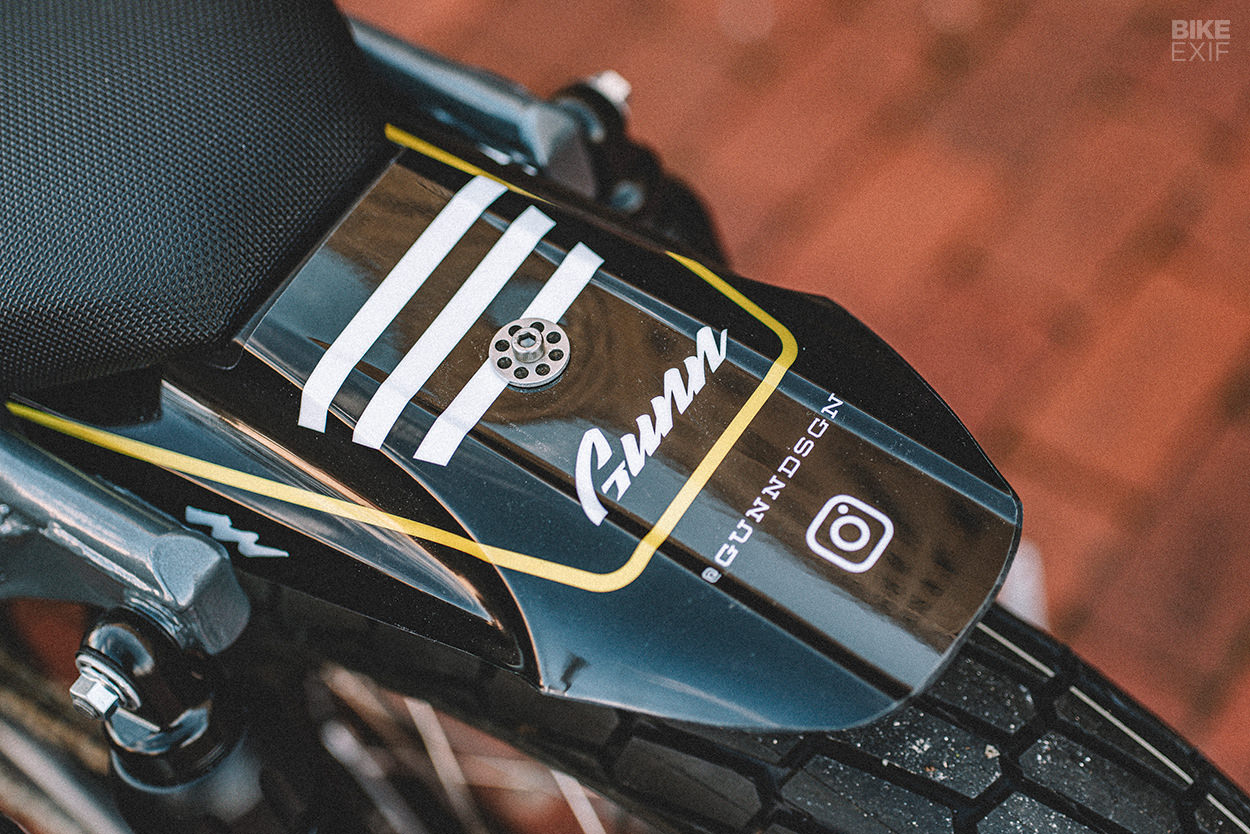 The seat pan sits on a revised rear subframe: Dan’s cut off the hoop, and also cut out the bridge between the shock. He’s replaced that with a custom piece that works as both a frame support and seat mounting bracket. 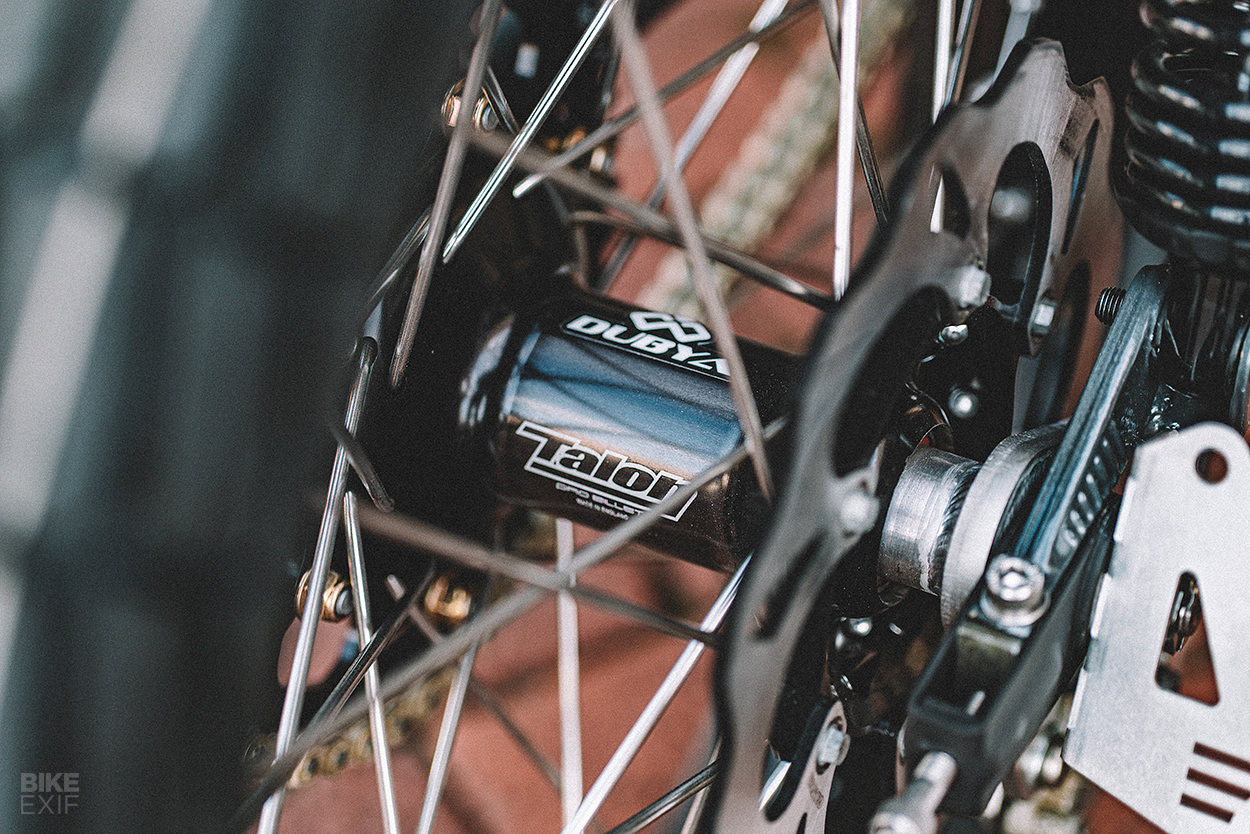 Those stylish new wheels are from Dubya: they use Talon hubs laced into 19×2.15 Excel rims front and rear. “I located new wheel bearings with the dimensions I needed, and created my own wheel spacers to work with them,” says Dan. The tires are Maxxis’ DTR-1 dirt track pattern.

We tried to ID the eye-catching little tank, but failed. Dan tells us it’s from a 1977 Yamaha YZ80 two-stroke, and it’s an inspired choice—especially with a baby version of the famous speed block graphics. 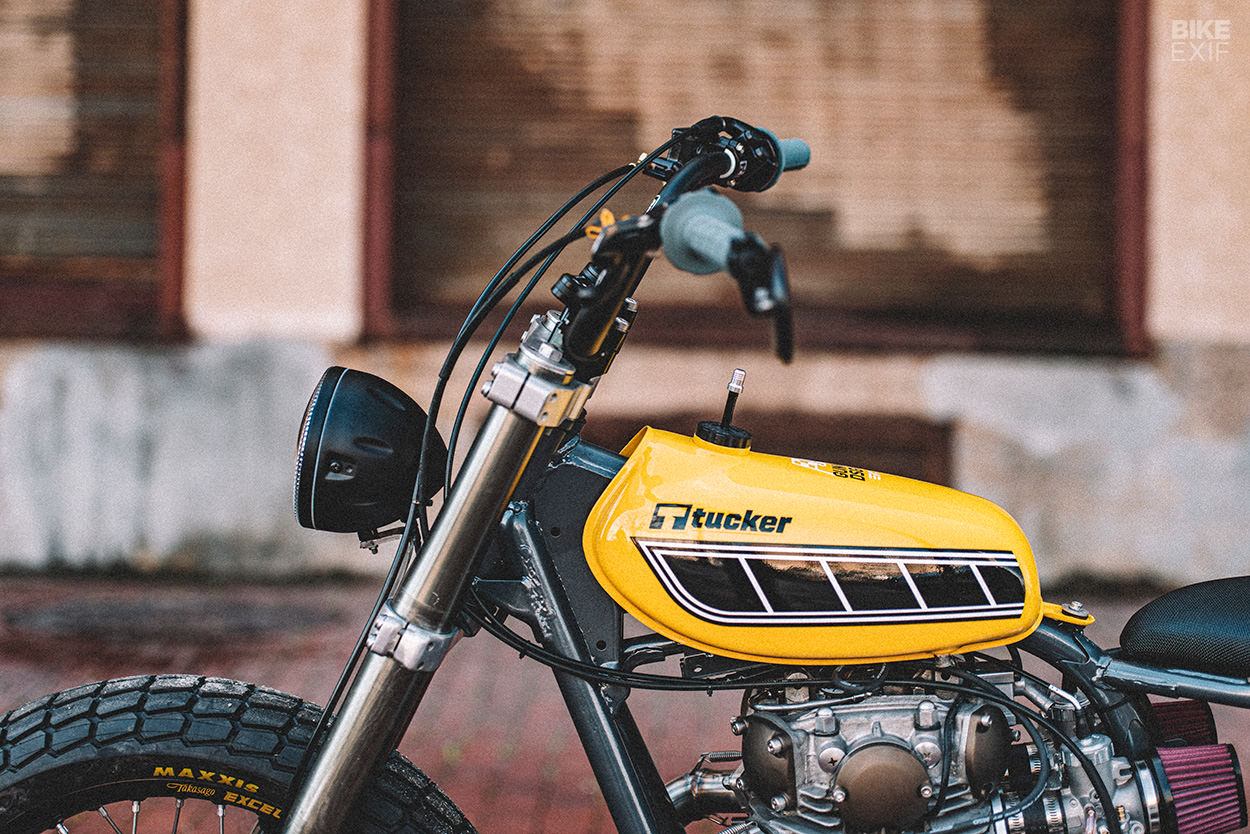 Dan’s left the internals of the engine alone, but built new exhaust piping terminated with Two Brothers Racing Comp S mufflers. He’s routed the system to the left, “primarily to keep the header heat away from the clutch basket and transmission gears.”

The carbs have been upgraded with a Mikuni VM34 kit, which should boost power and sharpen response nicely. 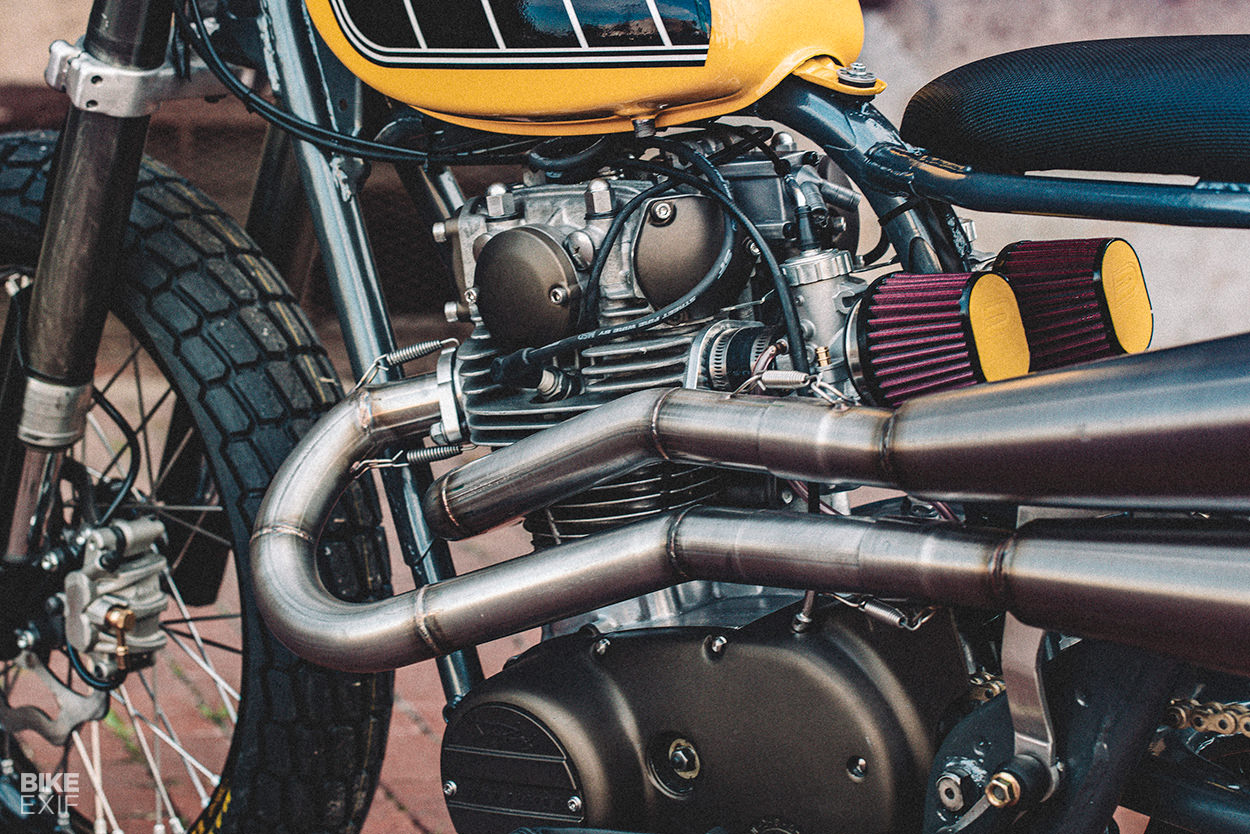 The engine covers, foot peg mounts and kick-start lever have been Cerakoted for a clean look, and Dan’s used stainless Allen screws on the valve covers, in place of the original studs and acorn nuts.

The bars are ProTaper’s relatively tall and comfortable EVO Adventure Highs, and the same company supplied the levers, grips and pegs. Motone switchgear and CRG Hindsight mirrors complete the cockpit. 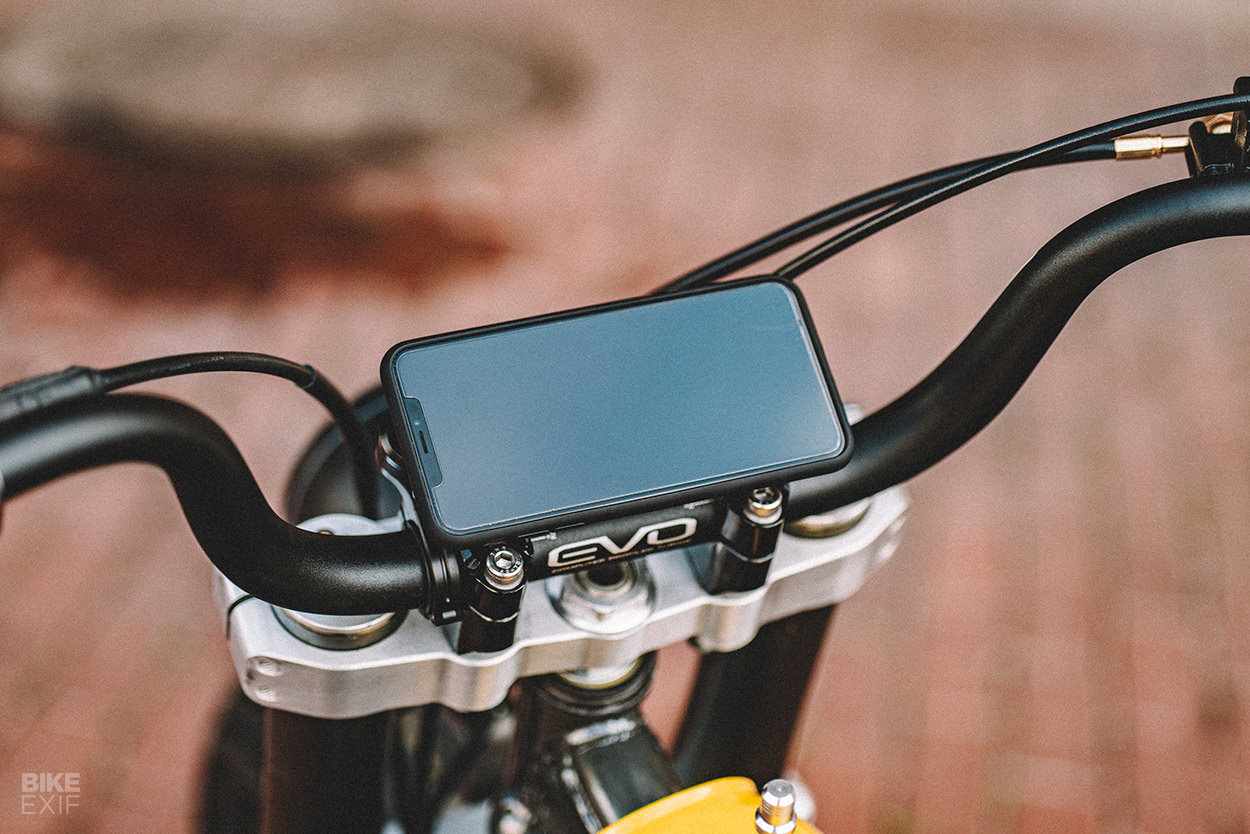 There’s a smartphone mount from SP Connect instead of a conventional speedo, and leading the way is a halogen ‘Angel’ headlight from BikeMaster, with a bright halo effective around the lens border.

It’s a super-slick yet practical build, and a manifestation of Dan’s smart design vision. And also his entrepreneurial ability—an underrated but critical skill for any bike builder with ambition. 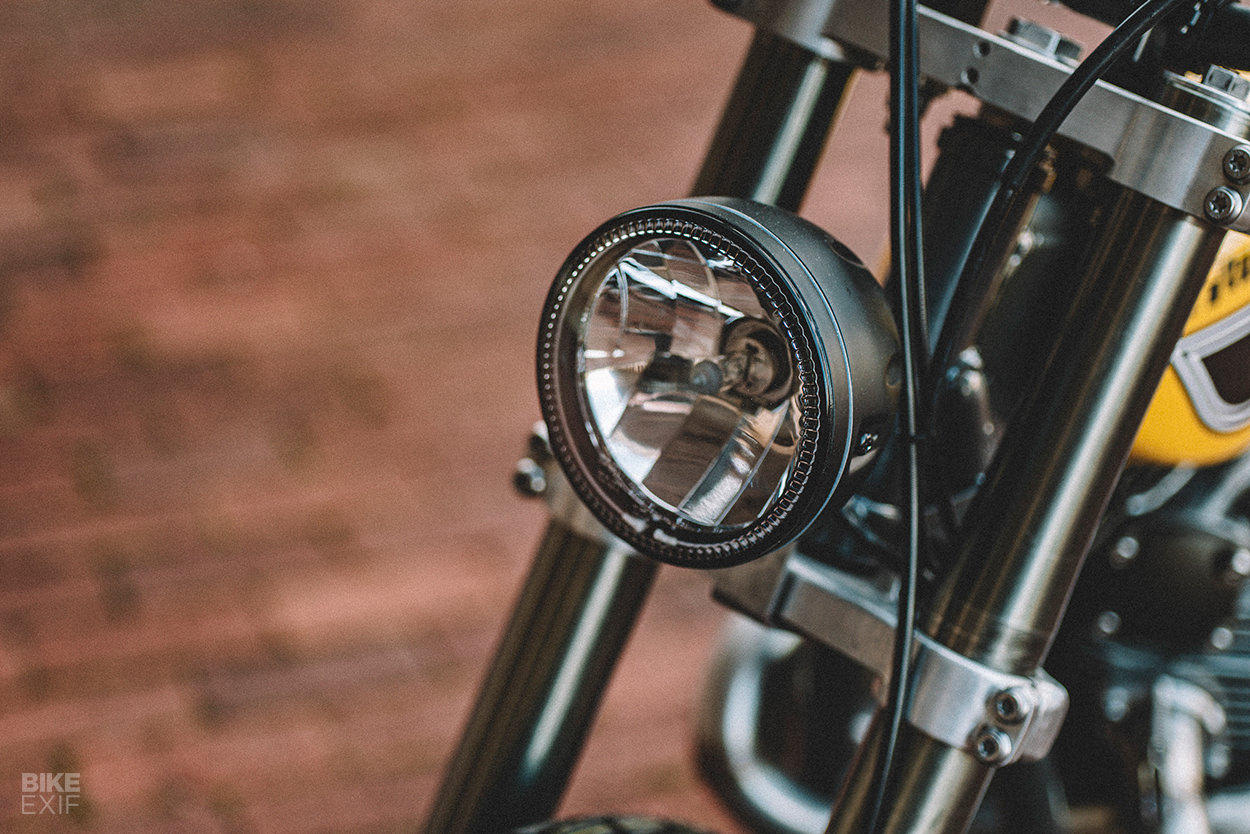 After months of effort in the Minnesota workshop, the XS650 was almost complete. A few days before the Tucker show, Dan drove to the Convention Center in Fort Worth, Texas, but still had to ship in some parts to finish off the bike.

The XS650 was the first thing dealers saw when they arrived at the show, and our Tucker contact tells us that it was a big hit—even in that traditionally v-twin-heavy environment. 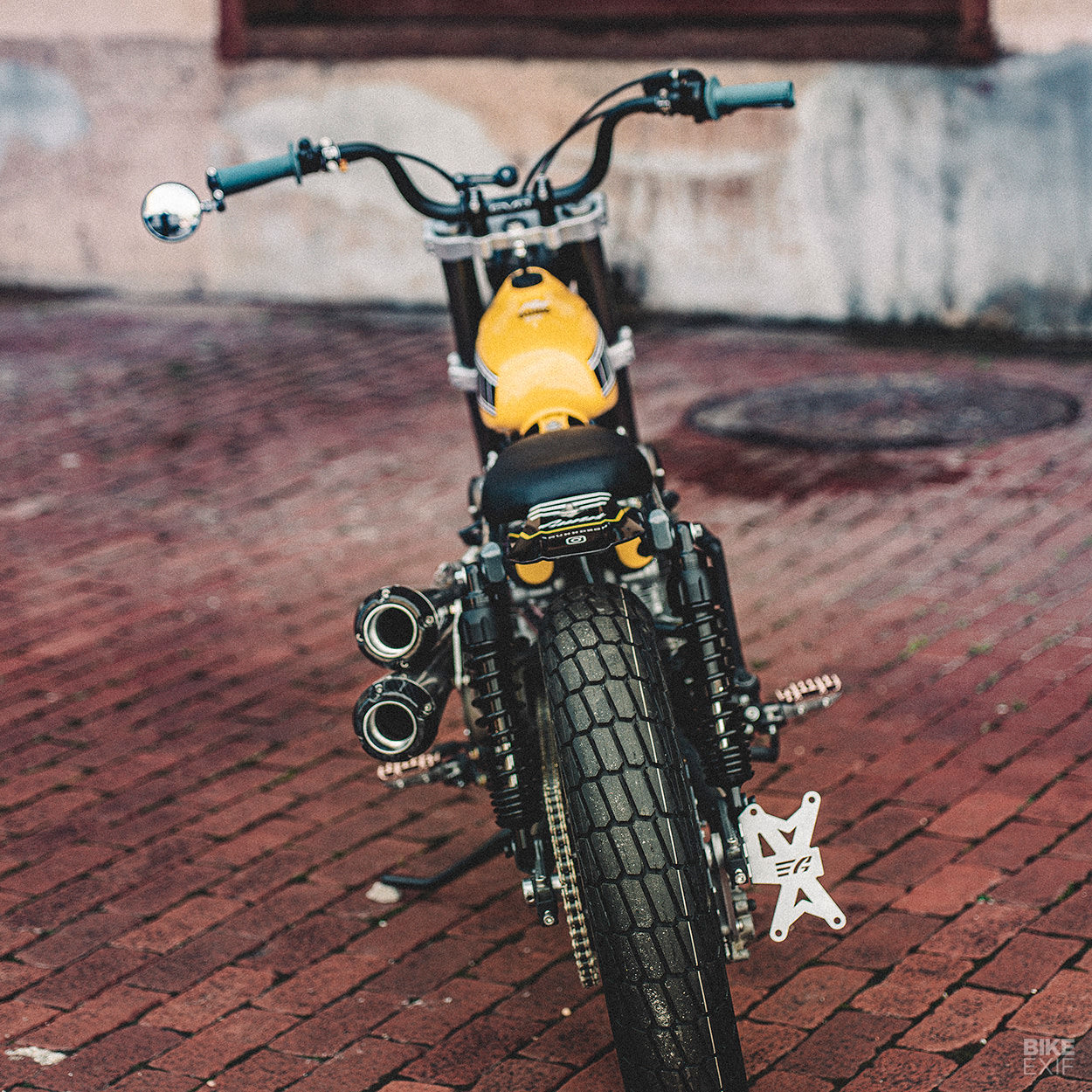 The bike now hits the U.S. show circuit over the next couple of months, and will make its first appearance at the One Moto Show in Portland in a week’s time.

For Dan, it’s Job Done and a sense of satisfaction. “There’s so much room in the used bike market to buy something and customize it to your liking, without having to fork out boatloads of cash,” he says. “Yes, this was a sponsored build—but it also shows just how cool you can make a bike with a little know-how, visualization, and elbow grease.” 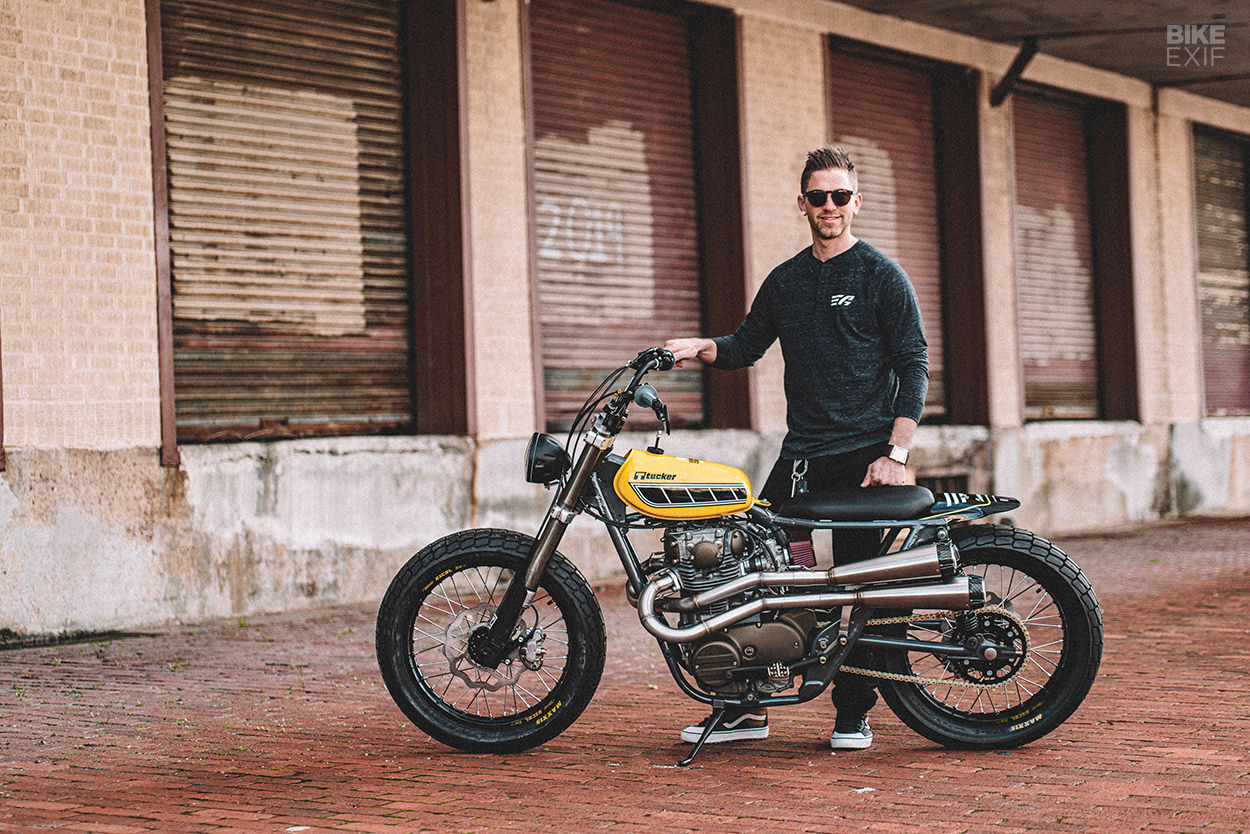