Not one but two incredible BMW builds, plus a wild Honda dual sport scooter, a rare Egli-Triumph track bike, and a muscular Honda CBX from Tokyo. Buckle up!

Honda X-ADV by Officine GP Design If you don’t know what the X-ADV is, get ready to have your mind blown: It’s an adventure scooter that Honda released in 2016. Yes, this neo-futuristic cafe racer started out as a scooter (and a dual-sport one at that).

Our compadres over at Return of the Cafe Racers don’t go into too much detail on how Officine GP Design got around the X-ADV’s frame and suspension to transform it into this, but it’s not entirely inconceivable. The X-ADV has long(ish) travel suspension, and the same parallel twin motor as the wildly popular NC700. So it has good bones. 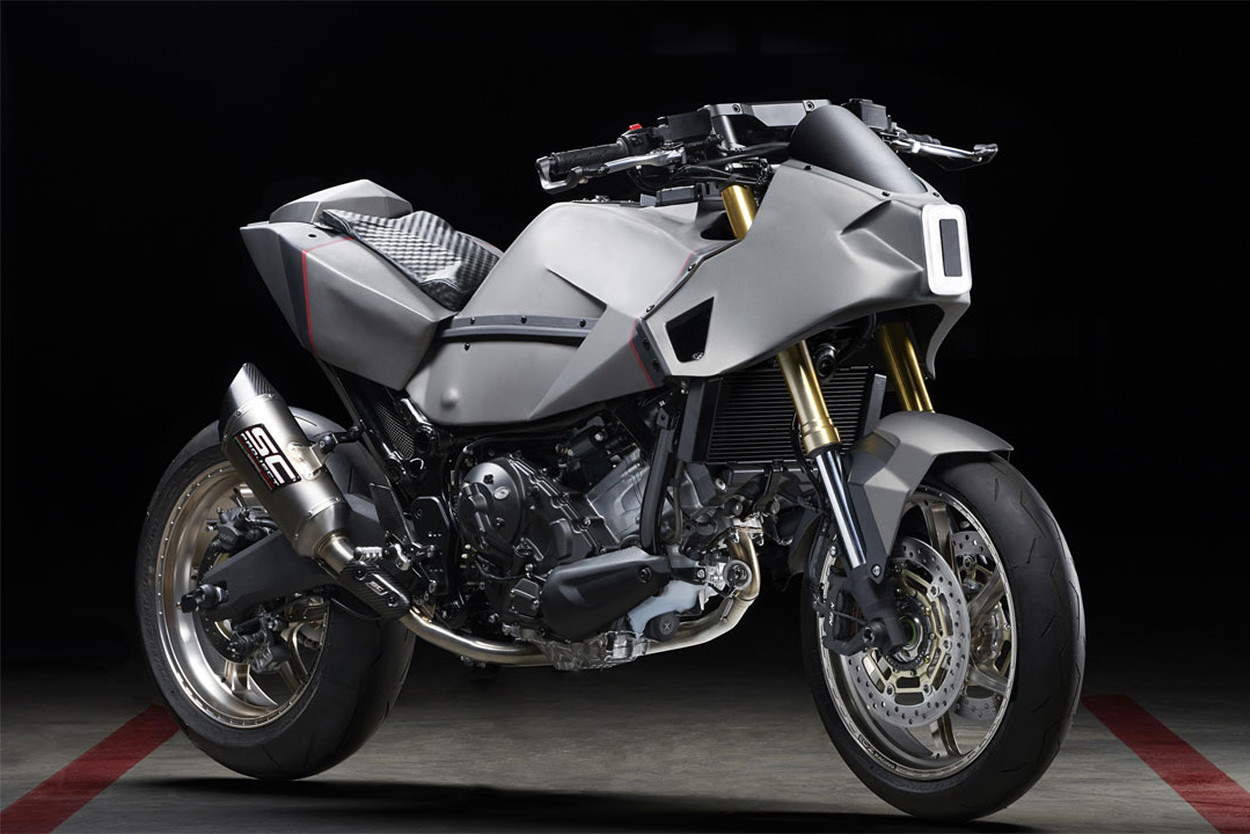 Those bones are now wrapped in a full complement of hand-beaten aluminum body parts. The steering area’s been reworked to take a set of clip-ons, and the front headlight represents the squared-off ‘O’ in the builder’s logo. The upgrade list includes a custom-built set of 17” wheels from OZ, an SC Project exhaust and a few trim parts from LightTech.

The final color scheme is a delightfully muted grey with black and red highlights, and the seat’s wrapped in exquisite Foglizzo leather. An adventure scooter-based cafe racer shouldn’t work, but we’re into it. [More]

BMW R65 LS by K-Speed Do the guys over at K-Speed in Thailand ever sleep? Judging by the frequency they push out new work, probably not. Hot on the heels of their Honda Monkey cafe racer, they’ve just unveiled something completely different: this perfectly balanced BMW R65.

It’s not as extreme as the K-Speed builds we usually feature, but it’s a good indication that the crew can do neat and tidy just as well as they do OTT. The starting point was a 1981 BMW R65 LS—weird triangular fairing and all. K-Speed stripped off all the non-essentials, and gave the Beemer a dose of high-impact style.

The BMW’s been slammed, and treated to YSS rear shocks and an all-new subframe. It wears a new tank and seat, slim fenders at both ends, and a pair of peanut-style valve covers for a more vintage feel. K-Speed also made up new exhaust headers, and capped them off with mufflers from their own Diablo range of aftermarket goods.

We’re loving the subtle bobber touches—like the 5” front light and low-slung handlebars. And even the classic sawtooth tires look right at home though. And if you’re tired of seeing Firestones on custom motorcycles, this’ll really tickle you: these are actually Taiwanese knock-offs, from a company called ‘F*ckstone.’ [Facebook Gallery]

Prototype Egli-Triumph OHC Triple Ben at Silodrome has a nose for sniffing out rare and exotic machines—and he keeps a keen eye on top auction sites too. He’s just dug up a real banger: an Egli-framed Triumph with a prototype overhead cam motor.

BSA/Triumph were experimenting with overhead cam engine designs in the 70s, and the story goes that at least two prototypes were built. They were based on the 750 cc BSA/Triumph ‘unit’ triple of the time, with a four-speed transmission. One prototype used a chain, the other a belt.

The design never went further than a prototype, but luckily a chap called Bill Crosby bought the belt-driven motor in 1983, and built it into a fully functioning Rocket III ten years later. But that’s not all he did…

Inspired to pursue the idea of a race-specific version of the OHC triple, Crosby used bits of the ‘spare’ motor to build a one-off version of the design. Then he wedged it into a Fritz Egli frame that he’d bought for endurance racing, but never used. The rest of the bike was completed with traditional telescopic forks, twin rear shocks and drum brakes at both ends.

This extremely rare and completely unique track bike is expected to fetch between £6,000 and £10,000 at Bonhams. It’s reportedly running, but the ignition timing needs attention. We’re praying someone buys it, perfects it, and runs it. [More]

Honda CBX by Remotion Although it was first released in 1978, the six-cylinder 1,047 cc Honda CBX is a great example of the excess on display in the sport bikes of the 80s. It would ultimately be outsold and overshadowed by the CB900F, but we (and many others) are still in awe of this inline-six monster.

In the right hands, it makes for a pretty epic custom build too. This muscular CBX cafe racer was built by Remotion in Tokyo, and it hits all the right notes. It’s been pared down beautifully, thanks to a new tail section and seat…but it’s the suspension overhaul that’s really grabbing our attention.

The front forks and single-sided swing arm are all from a Ducati 1098. Remotion made up custom triples to hold the forks, and custom shock mounts out back. Then they mounted up a set of compatible Kineo spoked wheels, wrapped in Pirelli Diablo Corsa II tires.

Remotion also overhauled the carbs, and fabricated a one-off six-into-six exhaust system. The CBX now wears clip-ons, a new dial, an LED headlight, and a custom-built license plate bracket behind the rear wheel. We’re not sure what would be most fun: riding it, or just hearing it scream as it flies past. [Via Custom People]

BMW K100 by Ruby Cafe The BMW K-Series is slowly gaining ground as a viable donor for custom projects, but it’s hard to make it look really good. Ardy Attaporn of Ruby Cafe in Thailand has knocked this K100 ‘flying brick‘ out the park though, thanks to a combination of sleek bodywork and clever engineering.

The K’s fuel tank, tail section and headlight nacelle are all one-offs, shaped out of steel. But there are a few really slick tweaks lurking lower down. This Beemer’s sporting a set of Honda CBR1000 front forks, matched to the wide 16” front wheel from a Harley Road King. Out back, Ardy’s wedged a Moto Guzzi V10 shock into a custom four bar linkage system that he designed in SolidWorks.

The rear wheel’s from a BMW R1150GS, and the brakes are a combination of Brembo and Kawasaki Z800 components. There’s also a set of Suzuki GSX-R clip-ons, an Öhlins steering dampener and an Acewell speedo.

Ardy also added CNC-machined triple clamps, and rebuilt the entire rear section of the frame. The exhaust is his handiwork too, and he even went so far as to design a new air box. We reckon it’s one of the sharpest K100s on the road—especially with that M-inspired livery. [Ardy Attaporn Instagram]