Before the doors opened: The 2020 One Motorcycle Show

The grassroots custom moto show is big business now. The big events pull in hundreds of display bikes and thousands of punters, whether it’s Wheels & Waves in France, the Bike Shed in London, or the Handbuilt and One Moto shows in the US.

The stats from last weekend’s One Moto Show in Portland are impressive: over 200 bikes on display, ten thousand beers sold, five bands performing and around 80 vendors selling everything from hard parts to soft leather jackets.

The show is run by Thor Drake’s See See Motor Coffee Company, and for the 11th edition, the venue moved to The Veterans Memorial Coliseum, a 1960s masterpiece of mid century modern architecture.

Sponsored by Indian Motorcycle, the latest show had five times the space of last year’s. More than 50 artists put it to excellent use, and there was even a circuit for flat track racing. 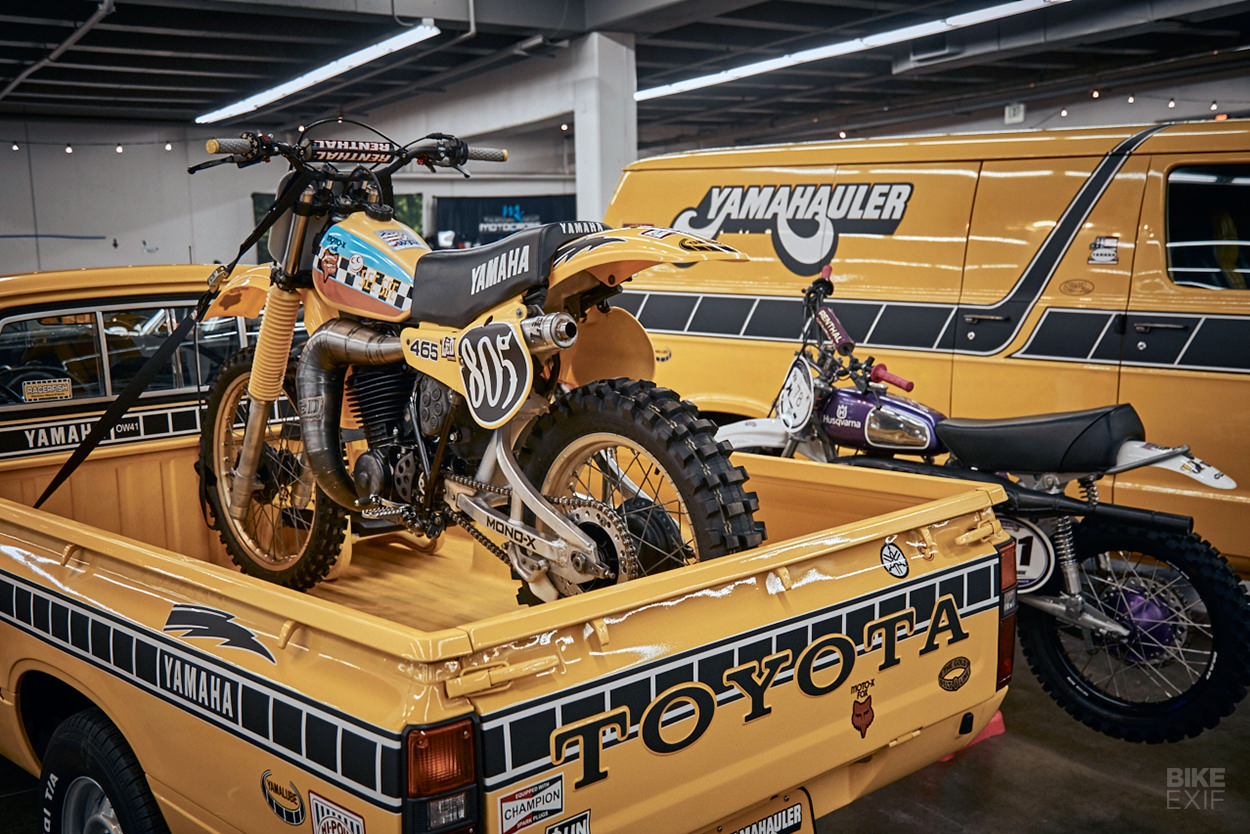 But it’s the bikes that are the stars. As the organizers say, the One show is “crafted to celebrate weird, rare, custom, classic and unconventional bikes in a way that everyone can enjoy, whether they ride or not.”

Our friend Paulo Rosas of Pagnol nabbed a press pass and roamed the halls as bikes were being loaded in. Here are some of our favorites.

Zero XP by Untitled Motorcycles The bike that probably garnered more attention than any other was this heavily modified Zero SR/F from Hugo Eccles of Untitled. When not working on motorcycles, Eccles is an industrial designer who has worked on projects for Ford Motor Co., TAG Heuer, Olympus and Nike—and his expertise shows.

Crowds gathered around the XP, and for good reason: the design is fresh and unusual as well as pleasing to the eye. Eccles took inspiration from drag bikes and experimental aircraft, and finished the bodywork in ‘Ghost Grey’ aviation paint. Ola Stenegärd, Director of Product Design at Indian Motorcycle, called this machine a ‘game changer,’ and we couldn’t agree more. You can read more about the Zero here.

Landspeed Dyna by Royal-T Racing Louisiana native Patrick Tilbury won The One Motorcycle Show Award with this turbocharged Harley with hand-fabricated bodywork. Power comes from an S&S 124ci Twin Cam motor, pressurized by a turbo plumbed in with stainless and titanium pipes.

A Haltech engine management system keeps the motor under control and Tilbury reckons output is somewhere around 280 to 320hp. The metalwork is aluminum with a raw brushed finish, and the custom aluminum wheels are a nod to the 1970s ‘Turbofan’ wheels. [Royal-T Racing]

KTM 250 GS by Carboni e Metalli Called ‘The Lunar Project,’ this 1980s KTM celebrates the 50th anniversary of the moon landing in a most original way. Vintage elements such as the steel frame and 2-stroke engine are married to high-tech carbon fiber and ‘additively manufactured’ parts, which caused a stir in the composites industry.

The subframe is carbon fiber, and the swingarm is a mix of carbon fiber and 3D printed titanium—reportedly a world first. We love the swooping, one-piece bodywork too, finished in NASA colors, and so did the judges at two recent European shows. The KTM took out the ‘Best Scrambler’ award at the Motorbike Expo in Verona, and ‘Best In Show’ at the Italian Wildays event. [More]

Honda XL500 board tracker by ABC This futuristic board tracker took a decade to complete, and comes from the British-born car designer Niki Smart of A Bike Company. Designed in Autodesk, the frame tubing is 4130 chromoly, the bodywork is carbon fiber, and the forks are Hossack-style units. The Honda took out two prizes at the most recent Quail Gathering and was easily one of the mostly technically accomplished builds at the One Show. Read more about this bike here.

Triumph 500 twin by Mangold Motorworks This magnificent Bonneville Salt Flat racer has a supercharged 1947 Triumph pre-unit motor, and broke the 500cc class record a couple of years ago when piloted by owner/builder James Mangold. James is a compulsive fettler, so expect to see this bike back on the salt again sometime in the future.

Yamaha XV750 by WKND Studios x de stijl moto Just when we were thinking the whole custom Virago thing was finally played out, along comes this sharp 1982 XV750 from Portland outfit de stijl and WKND Customs. And it doesn’t have a Benelli tank, either.

We didn’t know that Toyo made motorcycle tires, but the rest of the bike is a very solid execution, from the R1 forks to the neat monoshock and swingarm setup and the tightly plumbed exhaust system, which exits under a stubby subframe. It might be nearly four decades old, but this custom shows that there’s still life left in Yamaha’s air-cooled twin platform. [More]

The 15 classes of flat track racing, both professional and amateur, added even more cool machines—and characters. There were slick Super Hooligan bikes with metal flake paint, and battered old warhorses with even more scars than their equally battered owners. The racing added a touch of authenticity to the event, and balanced out the function-versus-form equation just perfectly.

Congratulations to Thor Drake and his crew on pulling off yet another superb show, and getting that mix of weird and wonderful just right. We’re told the vendors were happy and business was booming, but we bet the showgoers were sad to leave.